So lady's laptop has had a power jack issue for almost a year now, but almost a week ago it got even worse and would hardly stay plugged in or charge unless the plug at the back of the laptop was pushed and held into place just right. I've seen this issue before with a PS2 and I was able to fix that by re-soldering the DC power jack connection to the motherboard. Well, turns out that getting access to the DC power jack on a laptop is a hell of a lot more complicated than a slim PS2. I have to give credit were it is due, and this website had a complete walk through for her exact laptop with pictures:

I was able to finally get to the motherboard and the DC power jack after 18 steps of disassembly. x_x I re-soldered the connection and her laptop powers up perfectly again. I also cleaned out a major blockage of dust and lint out of the cooling fan area. Its practically running like new again and doesn't kick on the fan after 20 minutes of use anymore. Yay.

Here is a pic of the inside of her laptop with a circle around the DC power jack. A pain in the ass to get to, and the part I had to solder was only about 1-2 cm big, but we saved over $100 because thats the cheapest price I found to get it fixed at a shop. 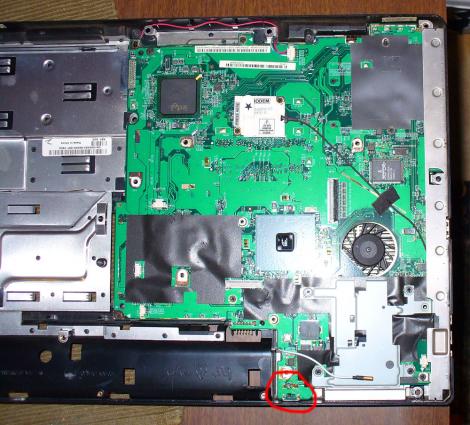 For my own records, I fixed this on 10/06/2010. Hopefully it will be a permanent fix, because if not I'll have to replace the power jack itself next time instead of just fixing one solder point.